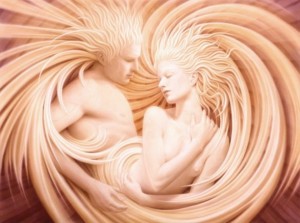 Most People are unclear about what Tantra really is and what it can do for you. Probably the most common view is that Tantra has some connection with Oriental religion, with uninhibited sex, and with the lovemaking positions and techniques outlined in the Kama Sutra, Hinduism’s oldest sex manual. To some, Tantra is a free-love cult, a survival of the psychedelic sixties; to others, it’s New Age spiritual sex therapy, part of the California lifestyle, a slice of 1990s pop culture.

None of these views of Tantra are wrong outright, but none really explain what Tantra actually is. So what is Tantra? What does it mean? And, most important of all, what is its relevance to us today?

The word Tantra is Sanskrit, the sacred language of Hinduism. It derives from the root word tan, which translates as “to extend, expand, spread, continue, spin out, weave; to put forth, show, or manifest.” Like the universe we inhabit, Tantra is continually expanding, spreading, and manifesting itself like a “cosmic weave,” made up of different energies. We are part of this weave, as are our forefathers and foremothers, all life, and every type of energy and matter. This includes thoughts, actions, and all physical matter.

Some Definitions of Tantra

Because Tantra is a mystical subject, it is nearly impossible to define. Even eminent scholars have had a hard time explaining what Tantra actually is. The different explanations of Tantra indicate its multifaceted nature. Tantra is a spiritual science, which means it is also mystical, in its interconnectedness, the holistic wisdom link between ourselves and the universe we inhabit.

By embracing Tantra, we become more “real,” more “complete.” How? By recognizing and stimulating our inherent sensual spirituality, we discover parts of ourselves that have remained asleep or have been repressed. With Tantra, an energy is released that is evolutionary and “upwardly motivated.” We can learn to use this energy for pleasure, for achieving our worldly goals, and for aiding our spiritual evolution.

Familiarity with Tantra can help a person to enjoy life to the fullest. It can help do away with guilt or fear, break down self imposed or limiting cultural boundaries, and guide us in our search for solutions. Tantra teaches us to become familiar with our mystical nature, and when we do so, our boundaries expand. We enter into new domains of awareness. We become empowered, more fulfilled, and more perfect.

Traditional dictionary definitions of Tantra are revealing. A Sanskrit word, Tantra is sometimes translated as “leading principle, essential part, model, system, framework, doctrine, rule, theory, scientific work,” also as “order, chief part, rule, authority, science, mystic works, magical formulas, means, expedient, stratagem, medicine.” Finally, a Tantra is sometimes defined as “a type of mystical teaching set out mostly in the form of dialogs between a cosmic couple. intimate insightful dialogs, between God and Goddess, Shiva and Shakti, the male and female Tantric adepts, were at times written down and became known as Tantras. Naturally, these dialogs, being intimate, included sexual secrets as well as many other fascinating topics.

Tantra has been well tested over thousands of years, not in worldly laboratories but in the laboratories of the human body, by Yogi scientists and Tibetan Lamas who were not driven by commerce but by the earnest desire for spiritual knowledge and liberation. Their observations and insights have been passed down to us.

The sacred Hindu and Buddhist scriptures known as Tantras provide detailed instructions on a wide range of topics, including spiritual knowledge, technology, and science. Their content is often paradoxical. In Tantra, science and mysticism go hand in hand, as do sensuality and asceticism. Just as advanced scientific treatises are difficult for the layperson to comprehend, so traditional Tantras require adequate preparation before they can be properly understood. © Nik Douglas